You find a Vixen costume. You then read the instructions on the costume for how to put it on and you strip so it will fit properly. You start by slowly sinking your legs into the costumes having to make a slight effort to begin with to fill the slender egs.Finally you get it put on up to your waist and slip your arms down into it as well. You pull the zipper up on the front and sigh a little the costumes chest feeling a little tight.Finally you bring the hood up over your face and start to adjust it so you can see out the eye holes.As you adjust the mask you start to feel a tingling sensation washing all down the front and back of your body.You stare in surprise as the chest seems to swell and gain weight, though the tight feeling vanishes as the breasts grow to a large size. You reach a hand to touch the now heavy orbs and can't help but gasp as you feel the pressure of your fingers on the sensitive flesh of your breast.The tingle washes over your groin now and a pleasure shoots up through your spin causing you tail to swish about with life.You realise you are no longer wearing a costume, you are a Vixen. 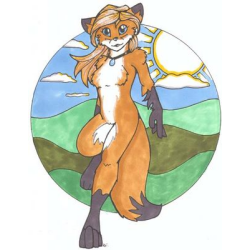 As you stand there and stare in confused awe at your new body, the world seems to blur around you, leaving you in a muddle of gray blurs. Waves of energy twist themselves around your body and fade away into strips of cloth.When they have finished, you find you are now clothed in a simple cloth shirt and knee-length skirt. The shirt is white and the skirt is black, and the fabric is somewhat coarse compared to what you are used to. You haven't been clothed with underwear of any kind.Reaching a tentative, curious hand up to your new breasts, you find that they support themselves just fine without the aid of a brassiere thanks to a layer of muscle just under the skin, and you guess that you aren't wearing any undershorts because they would be a pain to get over your tail. Still, it's disconcerting to have your privates left uncovered except for a skirt (notoriously vulnerable to light breezes) and to have only one layer between the rest of the world and the new features of your chest that you hope people won't pay attention to.While you are contemplating this, the grayness starts to come back into focus, resolving into a picturesque hilltop overlooking a small village that might have come from the late 1920s back on your Earth. You realize with a start that part of the costume deal involved spending a week in your new form, in its native environment. Whether you like it or not, you're going to get a crash course in living as an anthropomorphic vixen. You wonder whether you'll be given a place to stay during your week. Living as a vixen is bad enough; you'd hate to have to be homeless while you're doing so.

In a bit of a daze, you walk down the hill towards the village. Trying to look nonchalant, you stick your hands into a couple of pockets that you find in your skirt. In one of them, you find a crumpled bit of paper. You pull it out and uncrumple it. A street address is written on it.Walking down into the village, you succeed in finding the address on the paper. It's a small white house, mostly nondescript. Walking up to the door, you knock. Nobody answers. The thought occurs to you that perhaps this is your house, but the door seems to be locked.You check under the doormat, but no key is to be found. You're just about to give up and break a window when you feel something in...much as you hate to think about it, in your cleavage. Looking down at your chest, you find that you're wearing a small chain necklace with a key on it. You reach around the back of your head to unclasp it.The key fits the lock, and you go in, shutting the door behind you. From the small coatroom, you make your way through the hall and into the kitchen. On the table is a note. Picking it up, you read.Dear Player-At-My-Little-Game:
I, the person writing this note, am the creator of the costume house. As you may have guessed, I'm a reasonably powerful wizard. But this is all quite beside the point. You've taken your first new form, and I sincerely hope you're enjoying it. (If you aren't, I suggest you try to, as it will make your time in this form much easier, psychologically speaking. And should you find you like it enough, you could even forfeit the game and stay in your present form in this world forever.) You now must spend a Multiverse Standard Week (as noted earlier on, this is something closer to two Earth weeks) in your present form before moving on. To make this easier, lodgings suitable to your form have been and will continue to be provided. (Of course, "suitable lodgings" depends on both the anthropomorphism of your current form and the type of shelter standard in your new homeworld.If you're in a non-anthropomorphic form, you'll be provided with a simple den matching the dwellings made by others of your new species. But if you're anthropomorphic, you'll have a homeworld-average house provided.)You'll also be provided with a means of sustenance (reasonable hunting/foraging skills if non-anthropomorphic or placed in a primitive culture, a job if anthropomorphic.) What you do from there is up to you, but remember that you must make it out in 100 years (10,000 MSW weeks) if you wish to return to your own Earth.When you finish reading the note, you sigh and look around. This will be your home for a couple Earth weeks. You have no idea what you're going to do.