You go through the door. You step out onto Land.You try to get back to the door but to your horror it has gone.You then notice you are changing but to what?

The changes begin.When there finished you notice that you're half-unicorn and half-human. Meaning that your are a human-sized biped unicorn of approximately humanoid proportions.While the fur has replaced your clothing your face seems to be the same. Well apart from the horn sticking out from your forehead. You also notice that your feet are now hooves but your hands haven't changed that much. You have only lost 2 fingers on each hand. You have also grown a tail.Suddenly the changes stop. 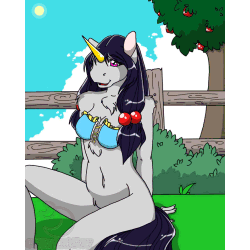 You start to feel different downstairs. At first you attribute this to being
turned into a unicorn.This theory soon gets thrown out of the window when you notice that your hair is now short.You look down just in time to see your breasts flatten.You realise that you are now a male half-unicorn and half-human hybrid.