You go through the door.You step out into open water.You try to get back to the door but to your horror it has gone.You then notice you are changing into a water creature from mythology but what kind?

A strange feeling makes you look down at your legs.They are merging together and you're growing scales.You realise you're turning either into a mermaid or a mermen but which one?

When the transformation is finished you realise that you're a merman. 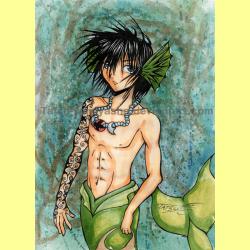