You wake up noticing that there are dinosaurs all around.As your mind take this in to account you notice you are transforming, but to what?

You feel your neck get stronger.As you wonder why your head gets heavier.You look in a nearby puddle and realise that you have grown 3 horns.The changes continue and soon you have a full triceratops head although you can still talk.Meanwhile the rest of your body is changing.Soon you are an anthropomorphic triceratops. 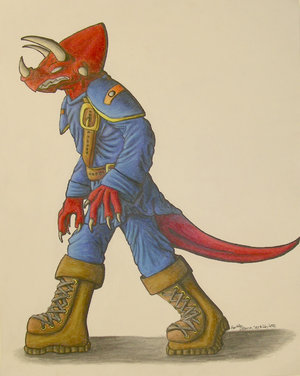 Almost as soon as you are used to your new body the changes start again. Soon you are a full triceratops.