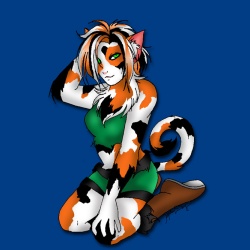 After a moment, another wave of change sweeps over you. This time, however, it's not physical, but mental. You feel a slight wave of nausea as many aspects of your personality change. When it's done, you are thinking like a cat-girl.From the female aspect, you find guys attractive, you're proud of your figure, and you hope to be a mother someday. From the feline aspect , you enjoy taking naps in the sun, batting light objects around, and stalking prey. Although you remember what it was like to be a male human, neither your female nor your feline sides wish to go back . You merely want to stay a cat-girl forever.