You notice a costume that looks a lot like tails from sonic and put it on. The costume cloth sinks into your clothes and merges with them.You feel the changes going on inside of you with your head and ears reshaping.The rest of your body soon follows suit. You realise you are now a female humoniod two-tailed fox. 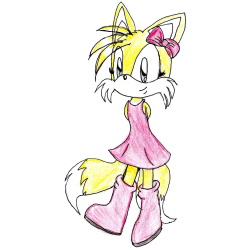 Suddenly, a bright light shows, and you cover your eyes. You open them to find yourself in the Green Hill Zone, a famous Sonic stage. You start to wonder why you were transformed into a Female Tails, when Tails is actually a Male, until you hear a scream. Actually, 2 screams. There's something about those screams that seems very familiar to you...do you run away, thinking that a scream means something horrible that could possibly hurt/kill you? Or do you follow the source of the screams, knowing that there are 2 poor souls that are in deep trouble?

You started to bolt to the sources of those 2 screams. You are a bit speedier than you were before for some reason. Then you realize that your 2 tails are propelling you to give you more speed. You smile, then continue on. You stop, and realise why those two screams sound so familiar. The 2 screams are owned by creatures who look like, none other than Sonic and Amy! They were huddling together, looking scared out of their wits. You run right over to them, and ask, "Hey guys, what's wrong?". The 2 point at a giant crab robot, and the person who is controlling it? You guessed it: Eggman. Now, of course you aren't scared by this thing, right? You've played many Sonic games and watched many Sonic TV Shows and movies, and saw too much of Eggman's robot to actually be scared of them, right? Right?

Time for a little deception...

You ain't scared of that thing...but the hardest way to hurt it, is form the inside, so you gotta get captured by it. You look very scared and cute, to try to convince Eggman to grab you and put you inside the robot. "Oh please don't hurt me, please!" You fake-cry. "I'm just an innocent little fox-girl who's very good with mechanics! I can help you! Just please spare me!""What in the world is she doing?" You hear Sonic say. You turn and wink at him, before continuing your act. You hear Eggman laugh maniacally..."Ha ha ha! Yes, fear me! Ha ha ha!" Eggman laughs. You can somehow tell that this is a dude in a fusion-costume just like you. Eggman continues. "Alright, I'll let you become my slave for all eternity! Come on inside..." Then a passageway inside the robot opens, and you walk inside to the cockpit where Eggman is operating on a computer which obviously is operating the robot."Hmm, it must've taken a lot of data, memory, and stuff like that to get your computer to operate this robot." You say , noticing the computer is much like your ordinary one at home."Yeah, it sure took a lot...I could bet that if you downloaded one more thing onto this, the computer would crash and this robot would deactivate..." Eggman said."Yeah, good to know..." You say slyly...then you lunge for the computer, go on the web, go to the Maple Story Website and chose to download the game. Soon enough, the monitor shows the Blue Screen Of Death, and the entire robot shuts down. You break out of the glass cockpit, laughing, and then land next to Sonic and Amy."CURSE YOU! I'LL GET YOU FOR THIS!!!" Eggman said, jumping out and running away. You are glad of what you did, and giggle a bit when you see Eggman trip before escaping completely.