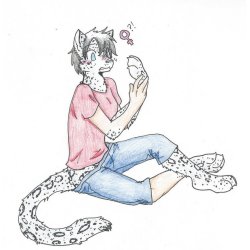 You can feel a need surging from within you—coming from your female leopard subconscious. She wants to roam free and investigate the area, possibly to find someone to mate with. The idea scares you, especially knowing that your female self is desiring another male. As a man yourself, you just can’t bring yourself to accept it.Then a new scent suddenly hit your nostril, and the female leopard jolts up with interest. Her first instinct is to follow the scent and find your its origin. You refuse to cooperate, but the female is much strong, taking control by herself. Before you know it, you find yourself moving in such fast speed that everything around you seem to blur.

Written by Stella Purple on 05 September 2017