The closet is almost empty, except for a thick furry coat hanging by the corner. You lean in to take a closer look, pulling it out, and finding out that it appears to be some sort of a costume. A bear? A dog? You are not so sure what it is supposed to be, but it has a dark heavy pelt and thin, realistic whiskers.Feeling playful, you unzip the costume and step into it, pulling the legs and arms into place. The size is way too big for you, which causes it to shag on your body. The size difference is just too much that it makes you sigh with a hint of disappointment. You are just about to remove it, when you feel like the material is suddenly shrinking down to your size. You blink your eyes a few times, thinking that you are just seeing things because of fatigue, but it is real and it is happening. Your heart quickens in panic as the coat keeps on downsizing itself. You try to pull the fabric to prevent it from suffocating you, but it is useless. The material is just too strong, and you do not have the strength to rip it off with bare hands.You try to grab on the fur again, only to find out that it has sink into the level of your skin, to the point that it feels like you are pinching yourself when you try to yank the costume off of yourself. Freaking out, you find a mirror, your eyes widen with surprise when you find yourself staring into a pair of unknown set of eyes which you are supposed to be familiar with.They are dark and big, making your sclera almost not visible. Your entire face is covered in fur, packed so tightly, it might as well replace your skin . . . or it is? You scratch yourself when you starts to panic, only to find that your neatly trimmed nails have grown ten times the length that it was an hour ago. Your nails have also turned black and slightly curvy.You reach out to your face, trying to feel what else has changed, only to panic when you can’t find your ears at either side of your face. Your eyes move up, your hands following to reach a pair of pointy lobes at the top of your head. You blink, and they twitch in return. You scream, and your reflection screams back at you.No, no, no, no! This is not happening! It just can’t be! What are you supposed to do? You have turned into a freak show now.You pull the hair on your head, only to find that it is way much shorted that you remember it to be. You groan in frustration, but the sound that vibrates from your throat comes out as a mix of a roar and an animal hiss. Holy heck! You have turned into an animal. A mammal, in fact. And as you take a second glances towards the mirror, you see some familiar features on your face that can be matched with a certain four-legged animal. With your wide nose, big tummy, and a stubby tail, you are in no doubt has been turned into a wombat — an anthropomorphic wombat, to be precise. But wait, aren’t wombats supposed to be short? You definitely do not feel the difference is height reduction.Once you have overcome your panic attack you head back to the door of the closet. The door to the closet is still there, half-way opened just like how you found it. You hesitates for a minute, contemplating your steps, before you decide to approach it. You open the door and peek inside carefully. You expect something to burst out of there, but nothing happens. You decide to be bold and reach into the walls of the closet, hoping you can find something that might help you to remove this thing and return back to normal.Just when you are about to give up, you feel yourself falling forward. Your heart stops when you find your hand sinking into the wooden walls at the back of the closet. You let out a yelp, which sounds like a strangled animal coming out from this new form. You catch yourself in the middle, almost toppling over but manages to dodge it. Usually, you are a very clumsy individual. But with the help of the furry transformation, you find yourself moving more agile than ever, even to be considered fast, which the thought you find impressive.You are not sure if it is wise to explore this any further, or just give up and try to adjust to your new change. After all, how hard can it be? 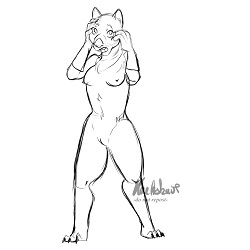 Written by stellapurple on 06 September 2016

Going into the hole

Life is all about taking chances. Didn’t you wear this costume with the same thought in mind? Why can’t you just repeat the same thing in this case? You are already at a knee-length, so might as well go skin deep. With a resolved thought, you push your arm into the hole experimentally. It goes in with ease, and when you pull back, a thin membrane waves into place. Your imaginative mind can not help but wonder if this will lead you to an alternative dimension, just like how you watch in the TVs. Curiosity gets the best of you and you steps in.You see a light at the end of the tunnel. You pick up your pace, the sound of your feet against the flooring echoes even louder. When you reach the other side, you are welcomed with an incredible sight. There are people that looks just like you — not the old you, but the new you. They move and work just like the people from your world, only you do not expect animals such as them to be walking on two legs, wear uniforms, business suits and such.Some of the wombats pause to look upon your arrival, their eyes going wide with surprise as they take in your physique. You wonder what is making them so agitated, before you look down upon yourself and realization hits you like a ton of bricks. You are nude! The clothes you were wearing are hidden beneath the sublimated costume, and now you find yourself naked over the shrunken outfit, which has now become your new skin.Your arms automatically move to cover yourself, your cheeks flushing with embarrassment. Some of the people who are watching you are chuckling, obviously laughing at your expense.You contemplate if you should head back in and put some clothes on, or stay and deal with the situation.

Written by stellapurple on 13 September 2016