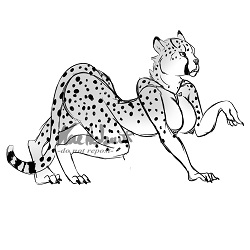 The light blinds, and you squint, a hand in front of your face to block out the light of the sun. You are in an open field, and the scent of grass is strong in the air. You stand in an open field, and you can feel the grass against the soles of your paws. You take a moment to scrunch your toes within the dirt, and you can feel the retractable claws slide out, scoring the earth. Your own scent comes to your nose; you just marked the ground, and it felt right.Taking stock of your surroundings, you realize you are surrounded by flat grassland. As you look around, however, you see buildings in the distance, more or less flat buildings with some distance between them, seeming to form a small town. You also notice three people on the front porch of a medium-sized building -- your new, keen eyes pick out their forms, and you see they are much like yourself, cheetahs that walk on animal-like legs. Two are standing, one is sitting, all male.However, unlike yourself, they are wearing a little bit of clothing; light shorts, primarily, and no shirts or shoes. You start to wonder if they would really care if they saw you naked, but you realize that is one social faux pas you want to avoid if you can. Instead, you head away from them, as they have not looked in your direction yet, but still towards the town, where you come to the closest building.Up close, you see the building is made of wooden planks, and you notice the windows have no glass, kept open to the air. The building itself isn’t that sizeable, and only has a single floor; it could hold maybe a small family, or a medium family if they were squeezed in tightly. You can’t help but notice the strong smell coming from the window; not a stink, like an unkempt house, but instead the various scents of other cheetahs like yourself. The smell is not very comforting, as these are the smells of strangers, and contain an element of the unknown.As you peer around the wall, you catch a glimpse of a female cheetah in the distance, running. Around her chest is a simple tight wrap, keeping her breasts in place, but her shorts are no different than what the men wear, seeming designed to be comfortable, yet not get in the way of running. The only other thing the female cheetah wore was a backpack, held tight against her back to keep from jostling. You don’t want to step out yet, and move to the other side of the building, peering around -- and then you see a clothesline leading from the wall, with strips of cloth and some shorts held to dry in the breeze. You take a pair and a wrap, though you cannot figure out how she had wrapped her own breasts; after a few excruciating minutes, you manage a simple wrap that you would not want to run in. The feeling is embarrassing and constraining. Not only that, but now that you are dressed, the next stage is revealing yourself, which is a stressful concept.