As the door slams behind and locks you don't seem to care, having already discovered this happening in the previous two rooms. You look around the room, there seems to be nothing but the five couches and tables scattered around the room, a fursuit on each couch. You briefly stare over the couches, and in term, the suits on offer on them. However only one really catches your eye... a raccoon.You walk towards the couch towards the raccoon suit and pick it up, feeling over the fur, it felt so real to the touch. You couldn't help yourself as you grow the urge to wear it. The temperature in the room was a bit of the cold side of mild, but you choose to unclothe down to your boxers and single-top, and put your removed clothes on the table.You slowly unzip the front of the one-piece fursuit, even the head was directly attached to the suit. You sit on the couch and begin to pull your legs into the suit, and you discover it is nice and warm within, urging you to continue further blocking the already like doubt it your mind. Soon you've got the suit up to your hips, the suit warmly clinging to your legs, as you then push your arms into the suit one by one. The suit seems to be a prefect fit as the arms too are wrapped tightly in the suit.You swing the racoon-head hood over your head, it snuggling warmly over your face, a faint tingling is felt at this point, but you shrug it off. You grab at the zip, pulling it up the body, over the belly, over the chest, and stopped just above the chest.That faint tingling you shrugged off earlier is back, and it's a lot for noticeable now, you shudder a bit as the tingling rounded over your skin, causing that goose-bump type feeling. You notice the already tight nature of the suit, is tightening further... especially at the groin region, as your manhood was squeezed into your crotch.As the tingling sensations increased, you realise what is happening to you. Regret takes over, your thinking goes to how you should have paid more attention to that sign a few rooms so you know what you where actually getting into..You are now unable to feel your normal skin or even the suit for that matter the tight squeezing over your body gone, what you do feel however is odd. The most noticeable being the feeling of a tail as it swayed behind you. The next thing you notice is the slit at your once man hood. You then look at your front, the zip still visible and chest still flat. The last thing you noticed seem to be the feeling of fur all over yourself.Seeing as thought the zip is still there you move your fur covered hand towards you chest to the top of the zipper, but as you did this, the zip seemed to fade away, your chest started and eventually starting to grow two lumps just as the top of the zip disappeared from the now expanding chest. The two lumps soon stop growing, and of course there are a set of breasts. You jiggle the breast around curiously, that feature finishing the changes...You discover a big mirror behind the couch, take it out and lean it against the couch, looking at yourself. Your appearance is that of the female raccoon, but still the hands, feet and head similar to a human, except the ears that are at the top of the head. Your fur is mostly covered on numerous shades of grey, your front torso more white in colour, your eyes are surrounded with a black 'mask', and your tail has a few black rings over the greyish fur. You look at the mirror focused on the breasts, and the silt where your old manhood was. 'Well I guess this turned out well...' you said to yourself '...although these breasts are nice, I'm gonna miss my manhood.'Your reflection in the mirror suddenly winks at you, as the arm of the reflection reached out to you. The result is it grabbing you and putting you into the mirror... 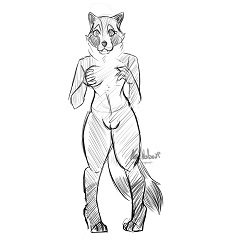 What's beyond the mirror

Knowing now that you have to wait a week to morph again to a different costume as your reflection of you was pulling you in, you didn't fight back for you let your nakedself pull you in the mirror and enter its strange new world. You didn't know What to expect from what was happening, but your reflection kept pulling you in as you were soon though the mirror. looking around to find your reflection double was nowhere to be seem that you realize you're not in the dressing room anymore, but some place else