There are many points in the mansion where you will change forms.The more nights you spend in a form the more your behavior will reflect that form (also the longer you stay at a time the quicker your behaviour changes).If you change forms your behavior will go to the current state of that form for you.(e.g you are a tiger for 10 nights , become a dolphin for another 10 and become a tiger again. The tiger form behavior is still the same as is was when you become a dolphin)You can only spend 30 consecutive nights or 90 total in a form before your behavior is totally that form's behavior.Also after 300 nights in the mansion, you will become the form that you have spent the most of the last 300 days in (apart from the one you entered in) in its current state.If any of the 3 previous situations (30 consecutive or 90 in one form or 300 nights total) occur you will then be teleported out of the mansion.You may also leave at any time through any exit, except the one you entered in. You will leave the mansion in whatever your current state of mind and body
is.If you leave the mansion by any means you may not come back for 5 years.To start you off you will receive a transformation into a...

Turning into a Fox...

As the changes start, you look down at your feet. You toenails have become claws and your feet have begun to reshape into paws. As pads form on the soles of your feet, a wave of reddish-brown fur starts to appear, and slowly crawls up your legs. As the fur grows, it seems to absorb your clothing.As the change moves up your legs, the bone structure quietly reshapes to match a digitigrade form. Soon the change is at knee level, and your knees suddenly reverse and bend the other way. The change speeds up as it moves up your hips, and you begin to shrink.As the change reaches your groin area, several things happen at once. Fur shoots up your whole stomach, a tail blossoms from the end of your spine, and you fall onto all fours, no longer able to stand erect. The fur climbs up your back, and reaches your nipples, which disappear into your chest.As the change reaches your shoulders, the joints alter to fit a quadrupedal stance, and the fur shoots down your arms, covering and changing them almost instantly. In a moment, your arms and hands are vulpine forelegs and paws. The fur covers your head as your face begins to reshape into a muzzle. Your ears move up to the top of your head and become furry and pointed, and your nose flattens out and becomes black and wet.Your tongue grows longer to fit your new muzzle, and your teeth become sharp and pointed. As the changes finish, you try to say something, but all that comes out is a vulpine whimper.You are now fully a fox.

As you stand there on all fours, trying to get a grip on what just happened, another wave of changes sweeps over you. The nipples that disappeared only moments ago grow right back, along with two other pairs further down on your belly. You also feel a strange pulling sensation in your groin.There is a mirror nearby, lying flat on the floor, and you walk over to inspect the results.What you see shocks you completely. Instead of the familiar organ that you should be seeing between you hind legs, there is an entirely different organ. You realize with a start that you are now female - a vixen! What's more, you are beginning to think like a vixen as well. 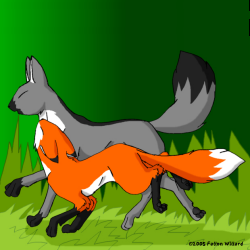