Sorry, Tinkerbell, but you don't believe in fairies. The ramblings on that sign out there was pure craziness, pure and simple. There is no such thing as magical transformative costumes--heck, even teleportation is still science fiction....So there shouldn't be any harm in trying on a costume then.The room's decor reflects its name; it's a small space, maybe the size of a college dorm room; some fifteen feet by twenty feet. The walls are seemingly translucent, or are sophisticated televisions, depicting some sort of farmland or countryside. The floor is paved with living grass. There's a perfectly normal tree and bush also in attendance. Yep, like the name on the door, this place seems... perfectly normal.You see some horse hooves in a patch of grass, but you're not that much of an equestrian. A rhino horn hangs from the tree, but you've heard they have bad eyesight, and that wouldn't be cool. There's also a tiger and beagle outfit scattered hither and yon, but nothing's really clicking.But soft! What's this concealed against the green grass?Lo, it's a lizard mask!You've always liked reptiles, why the heck not?In a jovial fashion you put the mask on and look around for a reflective surface to admire yourself in. Your tongue flickers restlessly and tastes the springtime breeze....Hold up a moment.Treachery! This mask is no mask; it's your face! Your head belongs now to a large, blunt-muzzled lizard similar to an iguana's but not quite! Suddenly your whole skin itches like something awful, and something guides you to tear it off like a velcro suit, revealing a green scaly hide underneath. Free of its former prison, a tail as long as your body extends from your backside. Throw in some claws and the metamorphosis concludes; you're a male, anthropomorphic reptile, a lizard a little like an iguana but looking more like a two-legged relative."HISSSSSS!" Your tail drags you down onto the ground, you unused to the weight. You sit up again and the room has departed; the countryside is now real as the snout on your face, albeit a touch more arid. It's like Africa but with less dryness."Um?" A voice, behind you! Still seated, you try to turn but are blocked by your huge tail.Ne'ertheless, you're able to see a humble young farmer girl carrying a bucket, curiosity on her face."Wow, it's like somethin' from the readin' books and no mistake!" she marvels. A silence passes. It's getting a little awkward. What to do next... 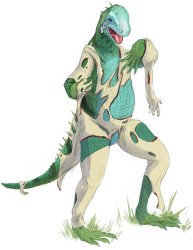