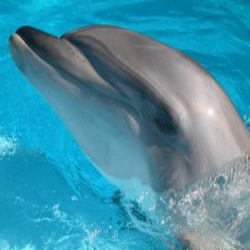 The female whale comes up to you and rubs against you, whistling as well. You can tell that she wants you to follow her... but to where?