I hope you don't mind gaining some weight. 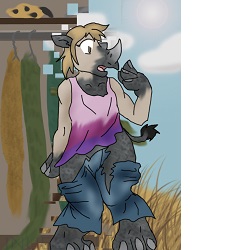 Written by Chrysalis on 21 November 2008