You go through the door.All of a sudden it slams shut and with no handle on this side it appears that you are stuck.There are five costumes in this room, all of them male, all of them are fictional air creatures.

You find a Hawkmon costume and put it on. You feel the changes going on inside the costume with your beak coming out over your nose and mouth.The feathers then starts to grow through, and soon except for your feathers you are naked. Just as you think the transformation is done, you feel very awkward. Your point of view goes up several inches, and you feel heaver as well. Then, as if to confirm your thoughts, your stomach pushes out a bit and your hips shrink.Your whole body becomes more bulker, even as your chest shrinks..You realise you are now a male humanoid hawkmon.

You find a digi-vice and a digi-egg.You then find a door and go through. You find yourself in the digital world.You then try and use the egg...

As you look at the egg you realise that it is the digi egg of hope. You feel your body changing.You face stretches out and antlers poke out. Your neck fur grows out.Your feet reshaping into hooves.Your face reshapes and soon you are a humanoid male moosemon. 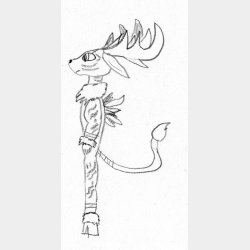 mind of a digimon

After being in that form for an hour you see a light and you go toward it and a voice asks you...do you wish to be a digimon permanently?

You take a step back, shaking your head and clutching your antlers. "No! No!Who are you?! What is this? WHERE AM I?!"You look around you, at the lush, demi-tropical jungle that smells of fruit and recent rain. Tall tan trees reach up toward the sky with frayed leaves that tinge the sunlight green. Madness has descended upon you, it seems, and reality has crumbled."I won't surrender my free will! I *won't!* Please! What's going on?"But the voice is silent. You are alone in the jungle, isolated, with no clues as to what you are supposed to do. Your life has lost all meaning and purpose. What is someone supposed to do?For the first few moments, you simply stand helplessly in the green-smelling air. Finally, through the brush, sounding as if it's originating from some hundred feet away, there's the sound of a struggle.

You look through the bushes to see a Monzaemonand a Leafmon .Suddenly a rush of knowledge come to your brain about each of the two.Monzaemon:
Monzaemon is an Ultimate Level Puppet DigimonLeafmon:
Leafmon is the baby form of Wormmon.You see Monzaemon attack Leafmon. You know that Leafmon dosen't stand a chance. Do you go and rescue him?

You go into and grab the Leafmon and therefore causing the Monzaemonand to miss."Is there anywhere safe nearby " you ask the Leafmon."Run into that tree" he says pointing at a nearby tree.You run into the tree and are surprised when you go straight through it. Suddenly a stereotypical wizard appearers."I am the wizard in charge.You have done a good deed at great risk to yourself.You are to be awarded the digiegg of Courage and if you want may travel to the bonus area. However there are a few negatives in there as well."

<!-- (Ignore the next paragraph if you went into the bonus area)
"No thanks" you reply to the wizard. "Ok then" he replies as he fades out.
-->As you wait the Leafmon digivolves into Minomon."Why was that Digimon attacking you?" you ask the Minomon."He is a test of the Digimon Emperor's new control gear 'Dark Spiral'" he replies "We attacked and were able to destroy the factory before he could make any more""We were also able to destroy his research so he has to start again. However we had to give most of our energy to Agumon to allow him to digivolve despite the control spires into WarGreymon. When the factory was destroyed he reverted into a egg. Then there was just us baby form digimon vs most of his army.I don't know what happened to the other 9 digimon.""We better go and save them right?" you tell the Minomon."yep" he answers.

As you poke your head out of the tree you see a flying digimon which you can see holds a Tentamon."There he is" says the Minomon from atop your head "We have to rescue him""But what about you" you ask "You can't fight as you are now".As you say that the Minomon digivolves to Wormmon."Pass the egg of courage over here please" he says.You do and he digvolves into Shadramon."Lets go rescue him" you say.