you notice a beagle costume so you decide to slide on the head then the paw feet and the rest soon you feel a change and you watch in horror in a mirror as y<spanSumTF>Y</spanSumTF>ou have become a beagle taur. 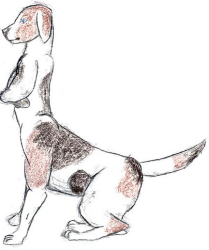 Written by Racerboy on 15 September 2006

You barely have time to look at yourself before the world starts spinning around you.When it stops, you find yourself standing on a sidewalk next to a pretty nondescript street that runs between two rows of gardens with houses in them. Lookslike a typical suburb somewhere in the world.You remember what you were told about getting transported to a suitable habitat and realize this must be it. Most dogs are domestic pets, so this makes more sense than ending up out in the wilderness somewhere.But does that mean you are someone's pet now? And why does this street seem so strangely familiar, like something you have seen in a movie? Well, you're not going to find out by standing here, so after getting your new legs sorted out you start walking slowly down the street..."Snoooopyyy!"You stop and turn in the direction of the shout, and see a short stubby kid with a round, almost bald head running towards you waving something in his hand. He's wearing black shorts and a sweater with a familiar zigzag pattern around his midriff.Of course! That's why the place looked so familiar. You are a beagletaur - not quite Snoopy, but close enough to be drawn to a place that seems inspired by the Peanuts comic strip. And this must be the equivalent of Charlie Brown.The kid stops in front of you waving what you can now see is a stick. "Stick!" he shouts. "Play stick? Yes?"You realize that he's acting like a dog, or at least as a dog would if it walked on two and could talk. Guess that means dogs (like you) rule here and humans... well, humanoids... are pets. Looking at him close up, you realize the kid is wearing a collar, which seems to verify your theory.While you are thinking, Charlie Brown (or whatever his name is) looks you up and down and calms down a bit. "You new?" he asks."Yes," you reply in a gruff voice that sounds like Boris Karloff on steroids. You try clearing your throat but that does not really make it any better. "Yes, I am new.""Oh." He looks crestfallen. "Not Snoopy then?"