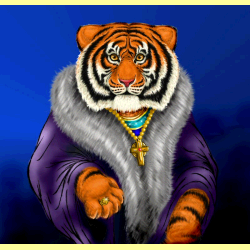 The room dissolves into nothing and you are hit by a wall of humidity. Blinking you eyes to get them used to the new conditions you find yourself in a forest.Looking around you find no trace of your former self, the only thing covering you is your fur. Your stomach rumbles telling you you need to eat. From the dryness in your mouth you need to drink first.Hearing the sound of a waterfall you follow it through the trees to find a pool of water filled by a waterfall. Falling yo your hands you lap from the pool, your new instincts telling you exactly what to do.