A small circle of grass serves as the floor in this cylindrical room with white walls and light pouring down from the ceiling. What is this place? What is its purpose? Alas, your human desire to know goes unfulfilled.Costumes sit before you in the silky emerald grass: A gray, brown and red pair of ears, a scaly skin, and a distinctly-patterned pull-over. There is no escaping this awesome labyrinth, no wishing your way out: the only option is to obey the mysterious signs.For whatever reason, you opt for the giraffe pullover.It's a little chilly in here, anyway... BY THE NINE DIVINES! When you don the comfortable sweater, it affixes itself to your very flesh! Fabric becomes fur that swooshes over your body like a vengeful hurricane!"The hell?" you cry as your legs snap, crackle and afterwards pop, your feet exploding into fiery bits, leaving behind cloven hooves! Your hands explode similarly, leaving behind three-fingered, ninja-turtle-esque appendages! You find yourself bumping sensitive horn nubs against the ceiling as your neck feels like it's put into a chiropractic machine! The final changes involve your stretching face and certain processes around your waist region!With a puff, the walls collapse in the room, leaving you sitting in a circle of grass in the middle of a dry and dusty tan African savanna, as an anthropomorphic, female giraffe.Suddenly, it ain't such a small world after all. 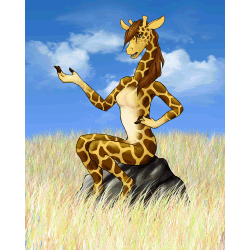