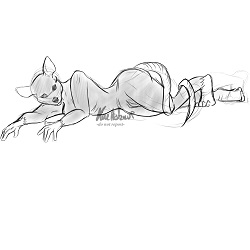 Your eyes slowly flutter open, a groan passing your lips. You feel a bit sore and heavy, but very quickly you become aware of some important things.First and foremost you are no longer in the room you were once in, but instead outside. It is twilight, the soft orange glow of the world around you giving a sense of the time. Secondly you are laying in some grass, the cool blades tickling your back. Thirdly you notice something even more strange about yourself.It no longer feels as though you are in the costume, yet, as you look down at yourself, you see that you are still within the brown fur of the most costume. Your ears shift upon your head, lowering with confusion and worry. That is why you truly notice that you are indeed no longer in costume, but you have become what the costume had been.A gasp leaves you, hands running over your body. You are definitely no longer male, no package to speak of, but rather a smoother area between your legs. You also have two a sized breasts upon your chest; definitely the markings of a true female.A groan leaves you now. How in the world did this happen? Now what were you going to do? Sure you are outside, but now you are a giant mouse! A giant female mouse! It doesn’t matter to you if you are anthrofied or not... This... This can’t be happening.If you stay here though then you will never figure out how to return to your former self -- if that is even possible.


Written by ShatteredBeginnings on 06 January 2016

Getting to your feet you look around you, gaining your bearings. You are in a field, and before you lays what appears to be a forest. Worry gnaws at your gut, but you know that you can not be afraid. If you are to figure anything out you needed to try and be brave despite your current situation.Your whiskers twitch as you begin to walk. The action feels strange, though more graceful and elegant than it had when you were a male. You assume that you look exactly like the costume had -- a simple field mouse with beady black eyes and a brown-black tail. There were worse things to be turned into but you are far from happy.It is a long walk to the forest, taking you two hours or so to get there. By the time you arrive night has fallen. You are hungry and tired... Needing both food and a place to rest.


Written by ShatteredBeginnings on 08 January 2016

You decide that though you are already tired you need to keep pressing on to find some food. Your paws stir the flora underfoot as you walk, beady black eyes searching for some form of food. Fruit, mushrooms, heck you’re hungry enough to eat anything at this point. Your head is throbbing and stomach is rumbling... This whole situation you are in looks rather bleak.On the plus side it is warm out. Perhaps late spring or early summer weather. You count your blessings that it is not the middle of winter as you press on, ears perked and straining to every sound you hear.Your heart beats fast in your chest, whiskers twitching nervously. You really don’t like being out in the dark in this situation. Every sound makes you jump, fearful that it might be some predator lurking within the forest. You feel helpless, more than a little fear within your heart that you might die like this. Things definitely are looking bleak but you aren’t ready to give up yet.After another half hour or so of searching, you find an tree with fruit upon it. The fruits are red and roundish; apples. Glancing around you see that there are some of the same fruit on the ground, looking partially eaten.


Written by ShatteredBeginnings on 09 January 2016

You take a Fruit

You decide to take an apple. It is firm in your hands, and smells delicious. Your keen sense of smell, which is far better than your current eye sight, tells you that the apple is safe to eat. You take a large bite, the juice dribbling down your chin. You let out a satisfied huff, ears twitching happily. Thank goodness you had stumbled across this tree.You eat the first apple and then another, then another until you’ve had your fill of the fruit. The juices stick to the fur of your chin and your hands, making them feel a bit awkward. Settling down in the grass at the base of the tree you begin to lick your hands, cleaning them up. The apple juice is eventually cleaned off and once more your fur is clean and slightly puffy.That takes care of one problem at least. You are fed, and you had a little bit of a chance to rest while eating. But what about the situation you find yourself in? You are still a female mouse anthro and it seems that there is little you can do to change the fact. At least you had chosen this costume, you think. You don’t want to think about what could have happened if you chosen something else instead.You look around, wondering what more you can do now. It is too dark to see too well... you are left with limited options.

Written by ShatteredBeginnings on 10 January 2016