Your eyes gazed at the large, plush badger costume. The costume has large tufted ears with fluffy white tips that draw your hands toward the costume with an interested grin. You feel over the soft, smooth and warm costume with all the pleasure of a person touching a beloved pet. The strange warmness of the costume felt comforting more than foreign, and it seemed to beckon you with silent promises of comfort.You feel around for a zipper at the base of the neck, as it is the only cool object on the entire suit. As you gently and tenderly pull down the zipper, it feels like you must be careful as if the suit could be hurt by your rushing of the process. Once the suit is open, you gaze inside and notice that the suit is very plush and bright pink. You reach in and feel the soft almost sponge-like interior to the suit. A small tag on the inside catches your attention.‘Fabric damages the suit. Enter nude only.’You read the message aloud with a smirk. You didn’t have a problem following the rule. After all, you’ll be dressed in the suit so nobody would see your cock and ass anyway, so you quickly undressed feeling the cool air of the room. You turn around and start sliding your legs into the leg holes of the one piece suit. They were comfortable and warm, almost like slipping into a heated blanket. As your arms and head work their way inside of the suit, the zipper came to life and it slid up to close the suit tightly.As you reach for the zipper to understand what happened, you noticed that you can smell things so much more clearly. The eye holes in the suit felt almost like looking out of eyes of an animal. The strange filter to the eye holes bathed the world in monochrome, the muzzle of the suit tightening around your head.As you struggle with the suit, a sudden sensation of warmth crossed your body. Following after, the suit became skin tight and pulling it off was for naught-the tightness was like a vice. It was then forgotten as you suddenly started to tumble backward from the uncomfortable tightness. You hit the ground with a soft thump, feeling the grass against your ass, legs and… tail.You felt the stubby length of flesh coming from the base of your spine, and you will yourself to move the long length of flesh. You feel your heart pounding as you attempt to shout in fear, but then you noticed that your muzzle was open and a tongue much longer than your own lolls out. The strange organ feels heavy but at the same time something deep inside of you tells you that this is how things are supposed to be. Everything is fine… 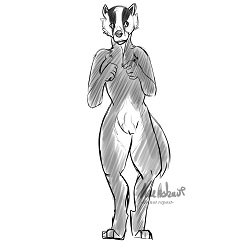 You stand up and scratch your fur with your blunt claws, noticing the large and powerful paws that your hands has become. You feel stronger, and you can smell every scent in the grass around you. As you marvel over your form, your eyes take in the strange landscape you seem to have travel to-a forest. There was a lake just past the tree line and the sun was blazing high in the sky.The loud snap of a broken stick behind you causes you to swivel your head quickly to the source of the sound. Standing behind you is an impressive boar badger, his gaze penetrating as he looked down at you curiously. His muzzle pokes and prods your chest as you gaze down at him fearfully, before you pause and notice three rows of breasts coming from your chest.You attempt to cry out fearfully but the sound that comes from your through is a throaty rumble that causes the male to look at you curiously. His muzzle peels back into a warm smile as he pushes you back playfully, the force is enough to knock you back into the soft grass. You notice three other smaller badgers starting to approach you, each of the males exuding a powerful musk that caused a strong feeling of interest in you followed by a powerful warmth spread between your legs.The males immediately react. They dropped to all fours limbs and lop toward you with their own smell becoming more potent and intoxicating. The largest male growls at each one, and they quickly seem like they’re ready to tear at each other’s throats. The tension in the woods was just that overwhelming. The largest one gave a threatening growl. You had to do something but the smell was overpowering as they sized each other up.