Element: Land
Type: Fictional
Gender: ????
So which door do you want

You go through the door.All of a sudden it slams shut and with no handle on this side it appears that you are stuck.There are five costumes in this room, all of them male, all of them are fictional land creatures.<small><suggestions><ul>

You see a costume that is blue. Your curiosity as to what could be blue gets the best of you, and you try it on. You feel a sensation throughout your body, as you finish putting on the costume, and suddenly the costume disappears. You look into a nearby mirror only to find that your skin is blue, and your feet are turning into clawed paws. You feel a sensation at the base of your spine, and soon a tail grows out.You look into the mirror again, and see a male humonoid veemon in the reflection. 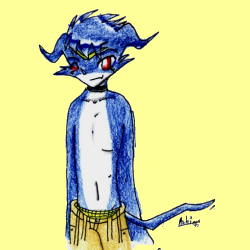