So what are your options?A pegasus , a griffon , a phoenix although that one looks like it might burn you before you get it on. A dragon, correction a dragoness, female room after all.The last one however is the one that strikes your fancy, a sphinx. This one at least is partially human. Still you have no idea how you will fill out the 8 limbs including the wings with just your four.You reach up and take the costume off the hanger, the other costumes rotating behind the wall , although you suspect if you returned your current one they would return to allow you to make a new choice.Now how to put the costume on. The zipper runs along the spine of the costume. The open limbs seem to be the arms and legs of the costume."Well here goes nothing" you say to the empty air as your legs slip into the empty legs of the costume. Your feet being pulled up by the shape of the paws, leaving you standing on your toes.The fake front legs of the costume dangle down as you place your arms into the costume as well. You turn behind to see the zipper moving by itself, slowly but not stopping, sealing your body into the costume.The head is the other part of the costume that needs to go on, standing on a pedestal, mouth open showing of her teeth. You walk over , already feeling like your paws are part of your body, your movement as natural as if you were born with them.You look into the mirror fearful that this will be the last time you see your face for a long time before putting the head over the top of yours. As the parts meet you feel and hear the seal form.Pain, that is the first sensation when the changes begin. Your spine feels like it is being pushed down hard, the front legs providing support as you fall forward onto them. The wings burrow into your body new nerves sending messages straight to your brain, every feather feeling the wind as it rushes through them.Wind? In a sealed room?You look around and try to move to trace the source of the wind but the front legs are not yet ‘real’ and remain fixed to the floor. However you see the walls of the room fading. The wind seems to be only on your wings though.The front of the costume begins to hurt quite a bit as you feel bones solidifying in the leg area, the legs becoming long and stiff, unable to be moved until the nerves set in. It is a painful process as each nerve seems to light up as they come into existence. 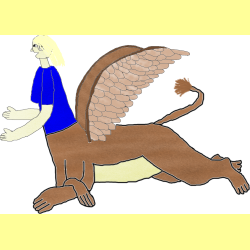 The room fades and you find yourself on top of a plateau.You don't give yourself time to think about it; you just run, hurling yourself off the edge of the plateau. You plummet like a boulder... until your wings open with a loud flap-ping noise. After that, you're not falling any more. After that......you're flying.Flight under your own power: It's everything you dreamed it could be. The experience is euphoric, even intoxicating, and for the next while, you lose yourself in the sheer joy of flying.You eventually glide back to the plateau and find... you're not sure what that structure is, but in some ways it reminds you of an ancient temple. Whatever it is, its architecture is peculiar; it has Greek-style columns, but its main body is more of a step pyramid such as might be found in Central America. You have no idea how these disparate design elements ever got together. You also notice Egyptian-looking hieroglyphs, and, surprisingly, you can actually read them! It's anybody's guess which is more disorienting: The fact that there's some force or entity capable of transforming you into a sphinx-like creature, or the fact that new information/knowledge could be inserted into your mind without your even being aware of it. What other bits of your mind and personality might have been altered..?You read the hieroglyphs: "Welcome, player of my little game, to your new home for the next two weeks. I hope you enjoy your time in your new form. You should find you have enough new hunting skills to feed yourself for your time here."Hunting skills? you think to yourself. But I don't have any... And then you realize that yes, you do have a pretty good idea of what to do with your new claws and fangs---fangs!? when did you---wait, it must have happened when you put the costume on. You run your tongue over them, feeling just how different your mouth is now. And you know how to hunt the same way you can understand a written language you never did before today, most likely. More mind-meddling... you shudder at the thought.