You approach a costume, as you do so all the other costumes disappear. Looking closer you realise it is a lugiaYou change into the costume and then the changes begin.The features take root in your body and you feel the wind rustle through them.You feel your new tail forming including the spikes.With a throbbing ache, you feel your head squeezed like putty into a new shape, your eyesight subtly changing into what you presume is that of your new species. Then, with a feeling not unlike giving blood from every spot on your arms at once, your wings are born.Then the changes stop leaving you a humanoid lugia of approximately human proportions. 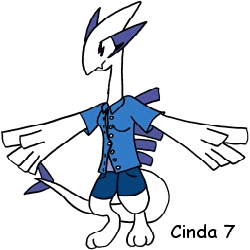 "If you put on a costume, you will then become that creature and be teleported to its home town.Then, it will be a week before you can morph.""Urg..." you haven't the coherency to answer before, with a surreal feeling of falling, you splash into an ice-cold pond of water."ARG!" you shout. That stuff be *cold.* Sputtering, you shake water off your curved muzzle as you clamber onto a rock, your blue outfit wet and heavy as iron.You find yourself in a natural cathedral, dark as death but for your Lugian eyesight, which illuminates everything with a soft purple radiance. Stalactites hundreds of feet tall loom overhead like the claws of an avian deity. The chamber is mind-bogglingly huge... y'know, just think of how big something would have to be to really boggle.The healthy scent of wet rock and sea water fills the air as you sit down a moment, hugging your knees with your wing-hands, tail curled.This has all been so sudden.You've been kidnapped, hoodwinked, hijacked even! Your warm bed,your personal items, all gone! Gone like dust in the wind! Forced to don
costumes and now warped into alternate dimensions! A million questions, nary an answer.Yet... you look around the cave again. Yet, really, these are the best kinds of adventures, you think. This is a grade A adventure, and you've just begun! You stand up again and swish your tail in wonderment, suddenly full of excitement. Besides, you had that stupid homework to do anyway...A breath is exhaled somewhere nearby, and you start. Curious, you pinpoint the sound, and then freeze. Having no real "hometown," you've been instead transported into Lugia's cave--the *real* Lugia's cave, and it's sleeping in the water right in front of you!

Back Away Quietly... and Fail Miserably.